About 6 km will break the record of the Austrian Felix Baumgartner. As the first man to cross the free fall speed of 1500 km per hour. After about a minute of flight, it will break the sound barrier. And before that happens, it will rise to the stratosphere suspended from a balloon the size of Wembley Stadium. All this will be done by a Polish skydiver.

Tomasz Kozłowski: When I got to the Americans who designed and performed the jump with Alan Eustace from 41 km, I told them that I wanted a jump that would attract people’s attention because the goal of my project is to build a global social movement and help people. Then we decided that to get such publicity, we must break the record. For the International Federation of Aeronautics to recognize him, he must be beaten by at least 3 percent. previous result. It would be enough to jump from 43 km, but we will try to climb 45 km.

What will be the difference in difficulty and technology between jumping predecessors and yours?

The jumper lifts up a helium balloon, which expands with height. At such large ceilings, the balloon volume must be doubled every three kilometers. Therefore, the balloon from which Eustace jumped was twice as large as the Baumgartner balloon. And mine will be twice as big as Eustace’s balloon. 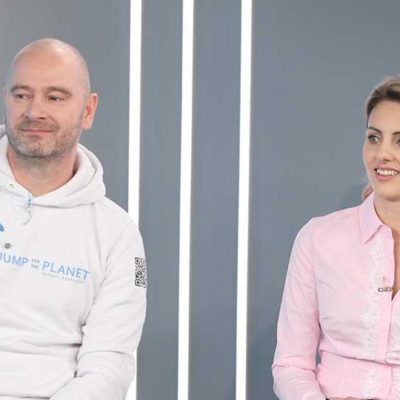 The Pole wants to jump from 45 km! He dedicates a noble purpose to it

A Pole, Tomasz Kozłowski, wants to break the world record in a parachute jump. His challenge is 45 km. And the goal that guides him is to help the poorest. How does Tomek prepare for this jump ? Read more

He wants to break the Baumgartner record. The Pole is getting ready to jump from space

About 6 km will break the record of the Austrian Felix Baumgartner. He was the first to cross a free speed jump of 1500 km per hour. After a similar flight, he will overcome the sound barrier. And before that, rise to the stratosphere suspended from a balloon at the Wembley Stadium Sport. All this will be done by a Polish skydiver. Read more